‘Fracking’ is one of those good old fashioned, contentious high political topics that polarises opinion. On the one side, we have the economic interests of big business pushing a new technology capable of lifting deprived areas out of poverty, on the other side of the debate are the interests of the environmental movement highlighting the risk of potential long lasting damage to natural resources and areas of outstanding natural beauty. So who’s interested in fracking?

Historically, big business, politicians (civil servants & committees) and academic experts drew up policies within the secure, dependable confines what was described in the 60s as the iron triangle. It really wasn’t very democratic or transparent, but the thinking at the time was that policy making should be left to experts and citizens shouldn’t concern themselves with a process  they couldn’t possibly understand. 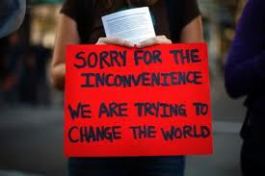 Cue the ‘hippies’, free love and social movements. Believe it or not you have a lot of O.A.P’s to thank for smashing of the dominance of the iron triangle. Activists got organised, forming pressure groups and demanding policy changes on the streets; politicians became aware of public opinion, the media and the need for more transparency and we all learned about interests and value judgements.

The issue of ‘Fracking’ is so contentious because it asks that citizens to trust the government and the scientific evidence presented. But we don’t. We don’t because of the horsemeat scandal and others like it. Regulation and legislation did not work when the economic interests of big business eclipsed that of food security and integrity.

Scientific evidence is not unbiased, it is framed by interests. The most potent example of this that springs to mind is the tobacco industry and their professional lobbyists. For decades their economic interests were dominant, it took decades of campaigning to change perspectives on evidence and force the transfer of the tobacco industries dominance to the interests of public health.

It’s no coincidence that the issue of ‘fracking’ is back on the the agenda again with the downturn in the economy. The government has been granting exploratory licenses and building up invaluable local knowledge through the hiring of key personal.

If you want to find out more about ‘fracking’ with the latest geological evidence click here for an article from the website Mother Jones. It really is worth a read.