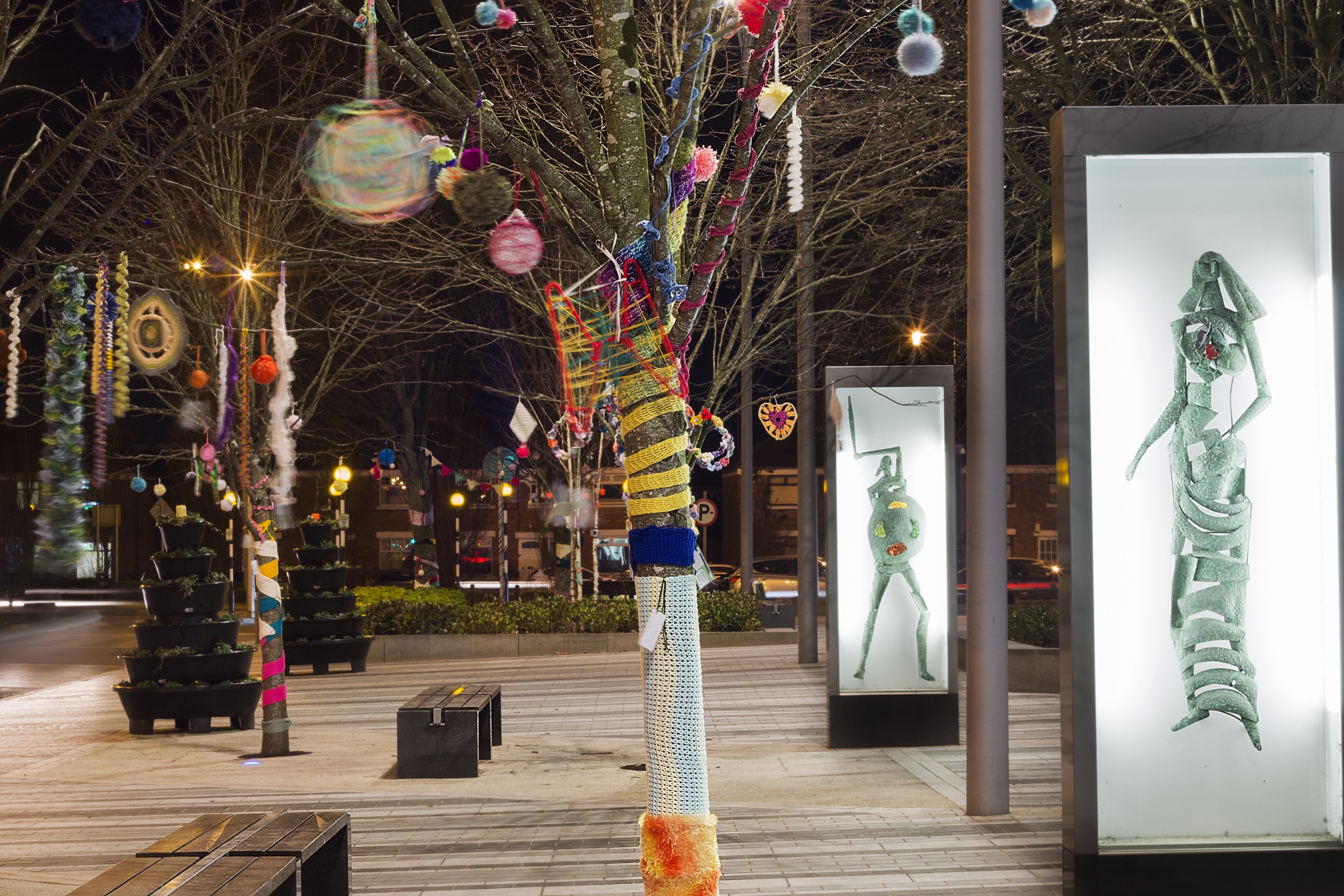 Driving through Dundalk tonight I spotted this multicoloured ‘yarnbomb’in the town centre.  I had to pullover to grab a few shots.
Amongst the little pink bollard hats,  pompom-adorned trees, woolly daffodil benches and patchwork litter bin covers were warm messages of support from the responsible parties; members of the ICA Louth Federation to celebrate  International Women’s Day.

“As to what your work as an Irish Nationalist is to be, I cannot conjecture; I know what mine is to be, and would have you know yours and buckle yourself to it”.

I find the reports in the National papers very disingenuous today. Apparently cuts in Child Benefit of 25% over the past five years have resulted in gender income imbalances, with women, surprise surprise, coming out the worst.

These are the same media outlets that five years ago provided a simple narrative for the public; that all women fell into one of two categories;

Category one spent child benefit on booze and cigarettes (based an advertisement by a Centra store for low cost alcohol on child benefit day);

Category two put child benefit payments into trust funds for their children (based on the testimony of two guests on the Pat Kenny show in 2009).

The child benefit allowance was cut, ‘and so it should be‘, screamed the masses.

Anecdotal stories plagued the media, especially phone-in shows like Joe Duffy; “I see them every month, twisted by four o’clock in the afternoon“, one caller would recount, “boxes of fags under the arms“.

The media narrative in 2009 was this; the nation was disgusted with mothers and the shenanigans they got up to every month. This gave the government an opportunity  to proceed with cuts to child benefit.

Most ordinary women, mothers, I know, were perplexed. I was perplexed.

Each month, child benefit allowance has and tries now to cover clothing, foot-ware, stocking the freezer, stocking the larder cupboard, paying back credit union loans for Christmas and school expenses (one of the most continually, financially draining aspects of raising children).

The cuts to child benefit predominantly had the result of less spending in local towns, forcing small shops to reduce staff, or in extreme circumstances; close altogether (Let’s face it, if you have €60 to feed a family for a week, you are not going to go buy a loaf of bread locally for €2.70 when a discount supermarket sells them at €0.69).

Yes, women have suffered hardest with austerity; financially, but also mentally, physically and emotionally. They have lost family members to suicide, they remain the lowest paid workers in the country, and face ridicule if they choose either freely, or economically to stay home and raise their children (if someone meets you for the first time and asks you what you do and you reply, ‘I’m a mother’, watch the confusion on their face, it just seems that focusing on raising your children rather than paying someone else to do it, is an alien concept!)

I’ll leave you with this interesting piece of trivia to ponder;  the word ‘hussy’, derived from the word housewife, why?

As little red riding hood learned from the wolf, two big eyes are all the better to see, so keep them open.

Politics is an organic, every changing process. Over time ideas that reside on the periphery are drawn into  mainstream ‘thinking’ as they gain public interest. In order for political ideas to become mainstream they have to exist in the first place and for that we need thinkers, people who are before their time, people who think outside the box. These ideas are then shared and debated, gaining traction. However because these ideas may be at odds with current dominant values they may require the use of democratic channels like civil disobedience, protest. Dissent has a long tradition in politics. As a form of activism it has been used by many people including Mahatma Gandhi and groups campaigning for civil rights like the suffragettes who campaigned for votes for women.

Up until the 20th century women in democratic countries were denied ‘the vote’, that was the dominant thinking on the issue. since the late 1700s there had been vocal opponents of this stance (see previous post on Mary Wollstonecraft) but their ideas and views were seen as dissenting voices initially, and it took time, civil disobedience, suffrage and deaths before the idea of equal rights for women became mainstream and women gained ‘the vote’.

When I reflect on the anti-war campaigner Margaretta D’Arcy’s incarceration at the age of 79, I see an act of conscience where the law was broken not for selfish reasons, but for moral ones therefore we should celebrate this challenge to state policy, not be afraid of it.

This state’s neutrality is under threat as Europe develops its military policies. Margaretta’s actions have focused our attention on this issue and I have no doubt that history will show who is  morally right on this issue, and I’ll always be on the side of the thinkers.

Now do you see why politics is spelled with two eyes?

Throw down your mops! On second thoughts pick them up and hold them high. Confused, you should be.  Nothing in life is ever black and white and that includes the perpetual genderised fight for freedom and equality.

Although the fight for equality often raises its’ ugly head in the workplace with all those sparkling glass ceilings, I believe the home is just as real a battlefield.

This summer an American Corporation called Swiffer launched an ad campaign for its’ new steam mop using the feminist icon ‘Rosie the Riveter’ ( she had ditched her mop to build fighter planes during WW2). They was uproar, and the company removed the images offering apologies to the offended group (their female customers). Read the article from the Huffington post here, and a piece in the Washington Post here.

Although rejecting housework is so tempting in the fight for equality, it still has to be done, cause even if we win, we’ll still have to do half of it! So how about rejecting the sexist corporations their ad agencies, and taking the power back?

Housework and feminine past-times need not be seen as tools of oppression, but opportunities for dissent. I found this paper on the internet while avoiding said housework entitled; ‘Knitting as Dissent: Female Resistance in America Since the Revolutionary War‘. It starts with the following line;

‘Primarily a feminine duty or pastime with granny connotations, knitting actually has a deliciously rich history of political subversion‘.

It made me smile.

I’ve to go now and put the dinner on.

“Women ought to have representatives, instead of being arbitrarily governed without any direct share allowed them in the deliberations of government”
Mary Wollstonecraft (1759 – 1797).

When I first read the above quote I couldn’t believe the date beneath it, it could well have come from an opinion piece on gender quotas in one of the National newspapers in 2012, rather than an 18th century feminist 250 years ago.

I discovered Mary while researching political dissenters and was instantly intrigued. She was an admirer of the French Revolution, and following Thomas Paine’s ‘A Vindication of the Rights of Men’ in 1790, she shed new light with her own publication, ‘A Vindication of the Rights of Woman‘ in 1792. This is one of the earliest works on feminism and was written in just 6 weeks.

So while the Irish Constitutional Convention votes to alter ‘women in home’ clause, much to the jubilation and celebration of politicians and political commentators, after the State was found to be complicit in sending young girls to Magdalene Launderies, excuse me if I don’t get too excited.